Oak is one of the most deep-rooted forest trees in Sweden and can tolerate a relatively wide range of soil conditions, making this species a good candidate for sites on the soils with increased clay content. Since the soil clay content is inversely related to acidification and litter accumulation, oaks growing on clay rich soils (content by volume above 5%) enjoys generally non-acidified conditions, higher soil water availability during dryer periods, and, possibly, a high level of microbial activity in the soil.

In southern Swedish forestry, productive sites with higher clay content are often planted with oak (Quercus robur L.) thanks to its higher tolerance to waterlogging, as compared to the most common silvicultural alternative of oak, the Norway spruce (Picea abies (L.) Karst.). However, oak stands on heavy soils may be at risk during periods of excessive soil water content, e.g. during springs and periods of high summer precipitation. The effect was exemplified by dieback of young oak stands in the Häckaberga estate in Skåne, following a rainy summer of 1998.

The main aim of this study is to quantify a non-linear relationship between growth response to periods of extreme precipitation and soil clay content in commercial oak stands in Southern Sweden. This knowledge should be important in helping the forest managers assess the risk of stand declines resulting from the extensive precipitation amount halting the functioning of the oak fine root system.

The project looked into the following specific questions:

(1) what is the clay content of forest soils indicative of high decline risk for oak stands?

(2) does oak growing on soils with elevated clay change their sensitivity to extreme in precipitation with age?

Field sampling took place across a range of sites located in Southern Sweden. The site selection was aimed to cover a range of soil conditions representative of monodominant or mixed oak stands in the region (Fig. 1).

We obtained climate data for each site for the time period 1953-2013 using the BioSIM 10.3 software (Régnière 1996; Régnière & St-Amant 2007). BioSIM is a collection of bioclimatic models and daily weather database, which can generate climate variables at various temporal resolutions, using a user-supplied list of locations. For each site, BioSIM interpolated data from the eight closest weather stations using inverse distance weighting output, while adjusting for differences in latitude, longitude and elevation between the stations and the sites. Since we were particularly interested in the effects of precipitation, we calculated summer precipitation (June through July) and so-called water ration, which is the ration between precipitation over a period, divided by evapotranspiration for the same period. Evapotranspiration was estimated by the Hamon formula (Hamon 1961, http://nest.su.se/mnode/Methods/penman.htm).

To characterize soil conditions at the sites, soil samples were taken with the Haglöf soil-borer at 25-30 random points within the plot. The borer was inserted into the soil down to a depth of 30 cm and samples from three soil layers (0-10, 10-20, and 20-30 cm) were collected for chemical analyses. The samples were combined in the field to give one sample per plot for each layer.

temperature of 40°C for 2 days. Twenty grams of dry soil were extracted in 100 ml 0.1 M BaCl2 at room temperature for 2 hours. The pH of the BaCl2 filtrate was measured. Concentrations of aluminium (Al), calcium (Ca), magnesium (Mg), potassium (K), sodium (Na), manganese (Mn), and iron (Fe) were obtained using an inductively coupled plasma analyser (VarioMax CN, Elementar Analysensysteme GmbH, Hanau, Germany). Total nitrogen was determined by the Kjeldahl method and a CR 12 method. A LECO instrument was used for the determination of total soil carbon. The concentration of C was normalized to the dry matter content at 40°C.

Realizing that the negative effects of precipitation are likely to be manifested after the periods with excessive rains, we analyzed site-specific climate data to identify three the most rainy growing seasons over the study period. We then extracted the growth patterns prior and following these years to evaluate whether the oak growth response is correlated with the amount of clay at the 10 to 20 cm soil depth.

To assess growth performance of oaks following potentially unfavourable period with increased precipitation amounts and water ration we calculated resistance coefficient, which is a ratio between the growth during and before an extreme event (year, with increased precipitation), following Lloretet al. (2011). Value of the resistance coefficient below 1 would be indicative of suppressed growth. For this calculations we adopted 3 year time frame.

Since the identification of climatic (precipitation) anomalies took place at site scale (i.e. no region-wide years were selected, instead, site-specific climate data were analysed), the degree of anomaly likely varied across sites. To address this issue, we ran partial correlation analyses. For each of the extreme years (i.e. the years with the highest anomaly, the second highest anomaly, and the third highest anomaly) we ran partial regression including resistance coefficient, clay content and the deviation of the water ration (alternatively – precipitation) from the long-term mean.

Apart from analyzing oak response to climatically extreme periods, we also evaluated relationship between monthly climate and growth over the complete period with overlapping growth and climate data. To this end, we ran response function analysis for spring and summer months of the current growing season. Prior to this analysis, tree-ring data were detrended with 32-year spline functions to enhance annual variability in the record.

To understand the relationship between clay content (Appendix B) and other soil conditions we run redundancy analysis (RDA) involving a range of cation measurements and clay content. Prior to analysis, soil data was standardized. All soil measurements used in the analyses referred to the 10-20 cm of the mineral soils.

Fig. 2. Resistance of oak growth (resistance ratio between the growth during and before an extreme event) in three the most west years at each of the sampled sites, as a function of the clay content in the 10 to 20 cm of soil profile. Horizontal lines indicate the value of the resistance coefficient indicating no effect of the climate anomaly. Values below 1 indicate growth depression and values above that line indicate growth improvement.

Clay content was strongly correlated with the cation exchange capacity and pH of the soils (Fig. 3). This implied that increased in risk of waterlogging was, at the same time, associated with better soil nutrient status. Indeed, water availability tended to be positively correlated with both growth and the clay content in the analyses of response function coefficients over the whole analyzed period (1970-2000) (Fig. 4).

Fig. 3. RDA analyses on clay content and a range of soil properties. Position of sites in two-dimensional space formed by the first two principal components are indicated by respective site IDs. Red arrows and letters in bold font refer to vectors representing soil variables. soil Amount of variability explained by axes is indicated at the axis caption of the respective axis. 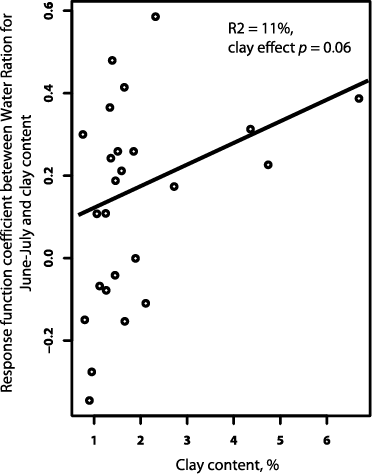 Overall, oaks growing over the analyzed range of clay content (0.8 to 11.9 %) does not appear suffer from the excessive precipitation amounts during and immediately preceding the growing season. There are three possible explanations of the lack of any pattern revealed in this study:

# The range in the soil clay content did not extend over the heavier soils, where this effect could be detected. Relatively few sites with the clay concentration above 5% could also play a role here, reducing the power of the statistical methods to detect a significant trend.

# Improved nutrition due to correlation of clay content with cation exchange capacity and pH alleviates a potentially negative effect of waterlogging on soils with moderately increased clay content (Fig. 3).

#  A negative effect of excessive precipitation is strongly connected to the effects of other factors not monitored in this study. One of such factors could be presence of Phytophthora, a soil-born pathogen of oak, which was reported to cause declines in tree vitality and growth across Europe ((Jonsson et al. 2003; Jonsson 2006). Due to a challenging protocol of Phytophthora identification and often non-conclusive results obtained with such protocol, we did not monitor the presence of this pathogen. 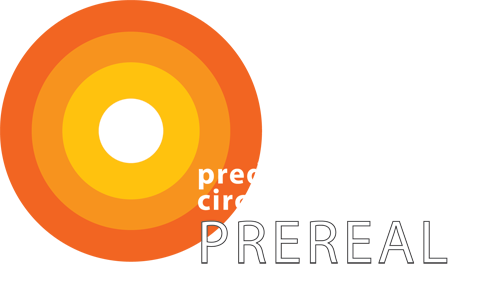